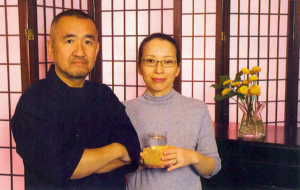 Kazuhiko Mukai, Sushi Chef and owner of the Kaido Japanese Restaurant in Grass Valley, grew up in restaurant family in Japan. He began to work the business as soon as he completed high school. At the age of 25, Kazu took off for Germany in the hopes of introducing some European style ingredients into his family’s business. He soon discarded his original plan, and turned his focus toward sharpening his English skills.

Kazu managed to find a job with the Japanese Embassy in London, England. His assignment: kitchen help in the Ambassador’s house. There, he developed his culinary skills in French, Italian and Japanese cooking. Now well equipped to enter the restaurant business when he returned to Japan three years later, Kazu discovered that his family had abandoned the restaurant trade.

Kazu immediately shifted his studies to business management. Once trained, a large tempura restaurant company hired Kazu and sent him to Bali, Indonesia as a restaurant manager, then transferred him to Los Angeles to the Bonaventure as their manager and sushi chef. Unfortunately, the corporation then went bankrupt.

However, Kazu landed “with his apron on” and became the manager of Benihana’s in the new sushi division in Torrance, California. He continued with Benihana’s to Newport Beach then Sacramento before finally settling in Grass Valley, where he and his wife opened their own restaurant, Kaido, in 2004.

Kaido offers both sushi and tempura, so for those clients who love sushi, Kazu creates tasty masterpieces of all descriptions. The special now is the Seven Samurai Sushi Roll which when examined from the inside out consists of spicy tuna, salmon, shrimp, yellowtail, eel, albacore and scallop. Wow! That one really is special. You may visually tempt your taste buds and make tentative selections before you dine simply by visiting the restaurants extensive website. Each artistically created entrée is carefully photographed so that you can consider your choices and come prepared for a fine meal.

For those you do not care for sushi, Kazu’s wife, Kaoru, lovingly prepares tempura on the grill side of the restaurant. Of course, there is also teriyaki: chicken, shrimp and beef on the “hot side” as well. So many options, but there are so many evenings. You can always come back.

What makes Japanese food different from other cuisines, especially other Asian cuisines? The two additives to the main ingredients are soy sauce and sake according to Kazu, the soy sauce being the most important.

Unlike many cuisines, Japanese cuisine emphasizes the natural taste of the base food material itself over all else, with a little soy sauce, rather than adding many different spices and sauces. Varieties of fish may be placed side by side in sushi with rice…avocado, but not coated with a heavy sauce or strong flavor from another source changing the natural taste originating from the ingredients.

With tempura, the philosophy remains the same. The batter must be ever so light, then very quickly fried so as not to tamper with or disguise the delicate taste of the precious contents held within that thin magical wrapper. The process takes skill and isn’t always done well. Kazu knows his wife is an excellent tempura cook.

A Japanese patron commented to her, “Why are you here? I have been there Japan many times. You should go back to Japan and make tempura there.” She felt the locals needed a refresher course.

Just to help set the mood during your meal; Kazu plays old Japanese movies in the background for your enjoyment. Some are black and white. Some silent.

Some animated ones. Kazu collects very popular old Japanese movies from 40-60 years ago in his personal library. Every week, he shows a different one. Kazu posts the titles on the web site well in advance for true aficionados. All easy to see. There are no bloody ones, some romances. All intended to transport you back to Japan of a different era as you dine.

Most of all Kazu wants his customers to enjoy eating out at his restaurant, enjoy the experience and the food. Kazu has studied what American people expect of a Japanese restaurant. He doesn’t want customers to wait too long for their food—no more than 30 minutes.

Kazu emphasized, “One of the other great features of Kaido —not only sushi is waiting for you, but hot Japanese food too!” Kazu hopes tourists and locals alike will continue to come often since he loves Grass Valley and hopes to spend the rest of his life here.